Drivers stuck at the Third and Howard traffic signal won’t have time to complain about the new, mid-block lights they’ll see when they look down the street. It changes 30 times a second, turning red, yellow and green, plus orange, blue, purple, pink, lavender — on and on.

The lights, which span the new Moscone Center pedestrian bridge, isn’t there to control traffic. It is art, put there by Leo Villarreal, the artist who in 2013 turned the Bay Bridge into a nightly display of constantly shifting white lights.

This follow-up, titled “Point Cloud,” is full color, an abstract and infinite array to be seen day and night. It opened just before 9 p.m. Thursday, Feb. 7, when Villareal slowly walked the span alone and was finally satisfied with the undulating kaleidoscope above his head.

“We are leaving it running. It’s a go now,” said Villareal, who spent five years on this project, a $1.5 million commission won through a San Francisco Arts Commission competition. Hotel-room fees and city bonds paid for the Moscone Center expansion, and the city’s “2 percent for art” requirement for civic projects provided for the art. “Point Cloud” is the costliest of four pieces intended to turn Howard Street between Third and Fourth streets into a public art corridor. Total cost will be $4 million. 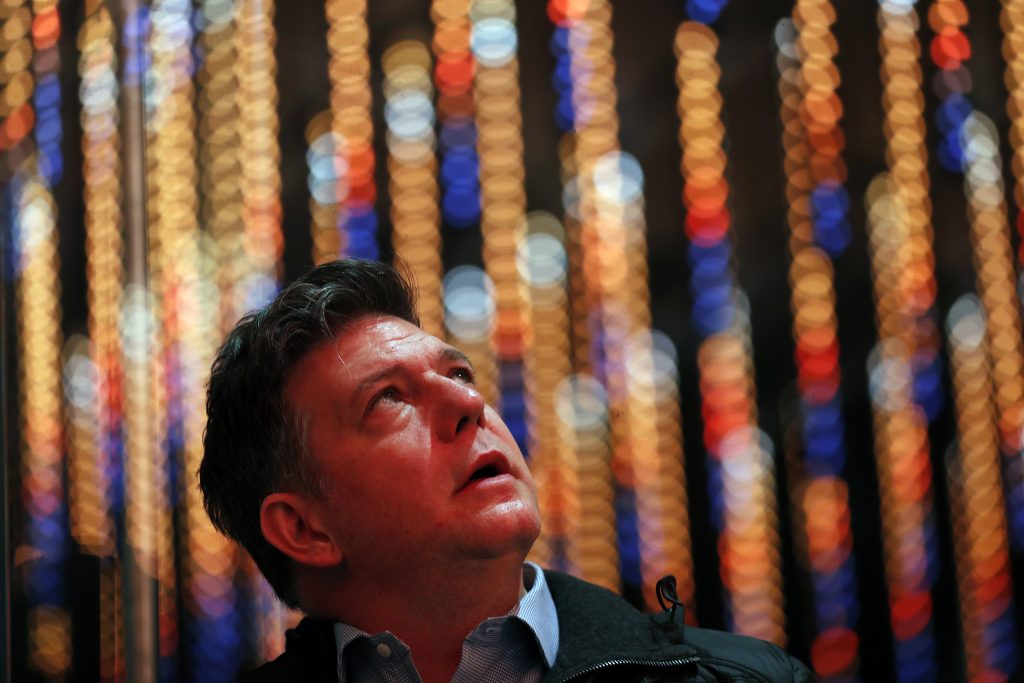 “Geneses I,” a monumental arc of steel rising 20 feet into the sky, by Christine Corday, opened in January at the western end to bookend Keith Haring’s frolicking dancers from 1989 at the east end. In between are an interior mural and a huge sculpture on a second pedestrian bridge, both being installed now. Until Villareal walked the 100-foot bridge and gave his approval on Thursday night, no one was certain if “Point Cloud” was finished or not.

“You are witnessing an artwork that is being created in real time,” said Marcus Davies, project manager for the Arts Commission, which will own the piece.

The bridge connects Moscone Center convention halls on both sides of Howard Street, and only conventioneers will be able to walk the span and see “Point Cloud” up close. But like the “Bay Lights,” its big-sister bridge installation, it is intended to be seen from afar, up and down Howard Street, up in the San Francisco Museum of Modern Art and up in the hotels and office buildings in the Yerba Buena district. 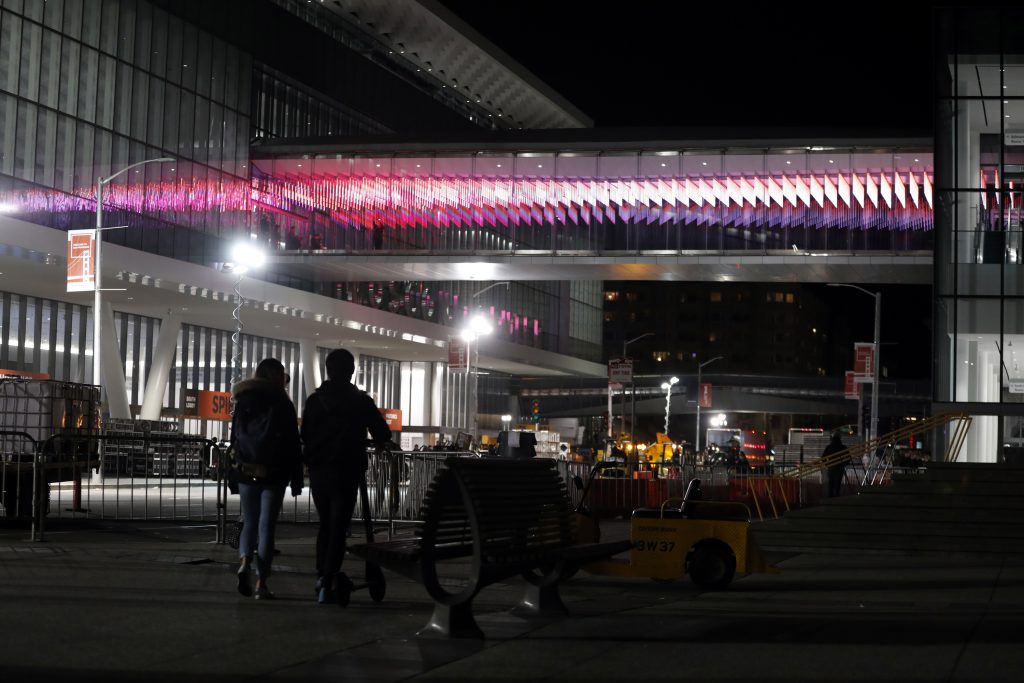 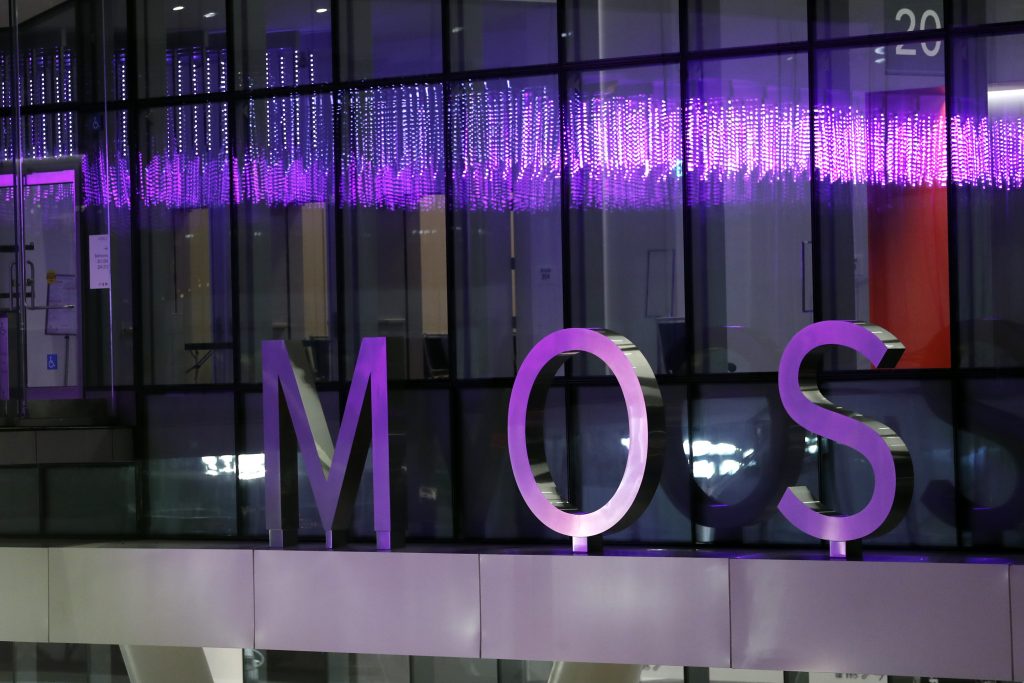 “It’s a surround experience,” said Villareal. “It has a daytime presence because it is covered at the top, and it has glass on both sides, so the reflection is also important.”

The light fixtures are mirrored, which will add to the abstract effect, as will rain streaking down the glass panes.

Neither Villareal nor anybody on the city arts staff seemed to know how much electricity it would take to power “Point Cloud,” but the operating costs will be paid by Moscone Center.

As with the “Bay Lights,” the random patterns in the Moscone lights are dictated by software Villareal wrote in his Brooklyn studio. It runs itself from a computer hidden in the closet of a convention center meeting room.

There are 67 circuit breakers to power 67 rows of lights. Each row is made of a series of stainless steel rods, 858 of them suspended from the roof of the bridge. On each rod are LED bulbs facing east and west, for a total of 28,288, about the same as on the Bay Bridge. Each bulb is individually programmed.

The patterns are “nonrepresentational,” and will vary depending on one’s point of view.

“It looks completely different from the street than it does from up here,” Villareal said, while standing on the bridge. 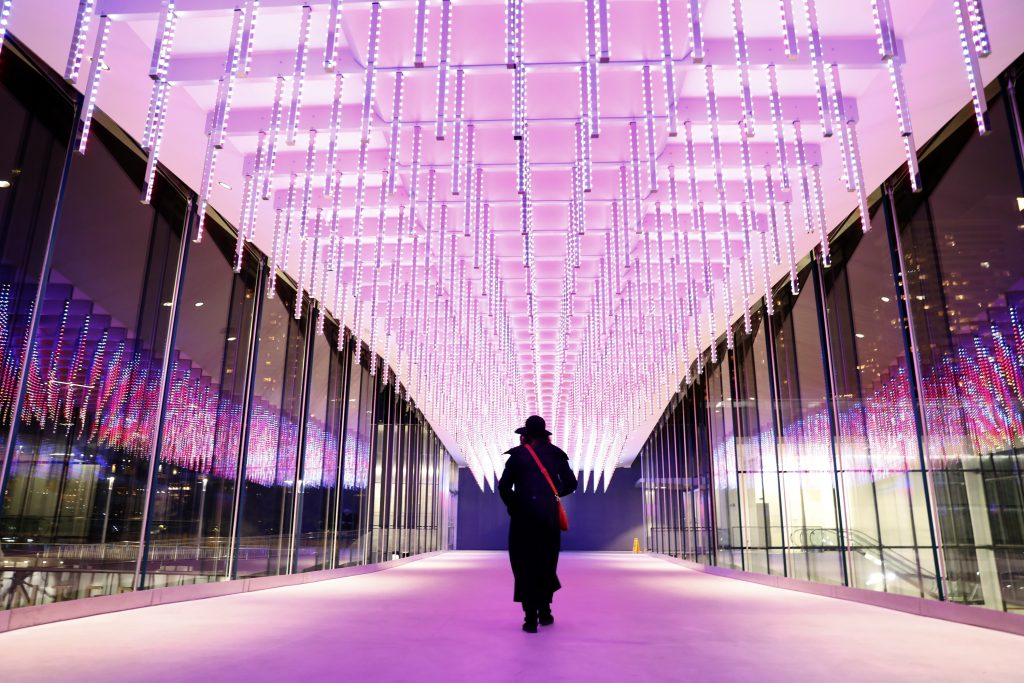 The artwork conforms to the shape of the span, which has a slight curve. It is “bow tie-shaped and quite subtle,” he said. “It’s cloud-like. It comes and goes.”

When viewed from the corner of Third and Howard at night, “Point Cloud” can be an overload, like the flashing strobes at a Golden State Warriors game. But it calms down.

“As it gets later in the evening, it goes into a quieter mode,” Villareal said.

Which reminded him that he had a plane to catch to New York. He’s on his way farther east to London, where come summer he’ll connect 15 bridges crossing the Thames with light. Titled “Illuminated River,” it is being called the longest artwork in the world and will be up for 10 years.

Villareal’s lights are becoming common on bridges. Now that he has done two in San Francisco, he is open to returning to light up a third, the Golden Gate.