Phoebe Robinson is an accomplished comedian who co-hosts the popular podcast turned HBO special "2 Dope Queens." She also stars in the Netflix film "Ibiza," is a New York Times best-selling author, and has been cast alongside Taraji P. Henson in the upcoming film "What Men Want."

In short, Robinson is a powerhouse. A woman with such whip-smart humor and an indomitable personality needs a space to call home that commands the same attention.

Her apartment in Brooklyn's Park Slope neighborhood fits the bill. The distinctive aesthetic is thanks to Robinson’s friend and NYC designer Karen Asprea. We spoke with Asprea about what it took to make Robinson’s home as dynamic as the comedian herself.

First, a little history: Robinson and Asprea go way back to 2004, their college days. The then-aspiring designer met the fun-loving U2 aficionado the way all solid college relationships start—in a dorm room.

“We lived across the hall from each other,” says Asprea. They struck up an easy friendship, which they maintain to this day, which made Asprea the perfect design partner when Robinson decided to become an NYC homeowner.

A busy entertainment career gave her little time to scope out properties, and Robinson needed someone with industry chops who also knew her style and needs to help her make a decision.

“We have a solid friendship, and Phoebe also knows how passionate and organized I am,” says Asprea. 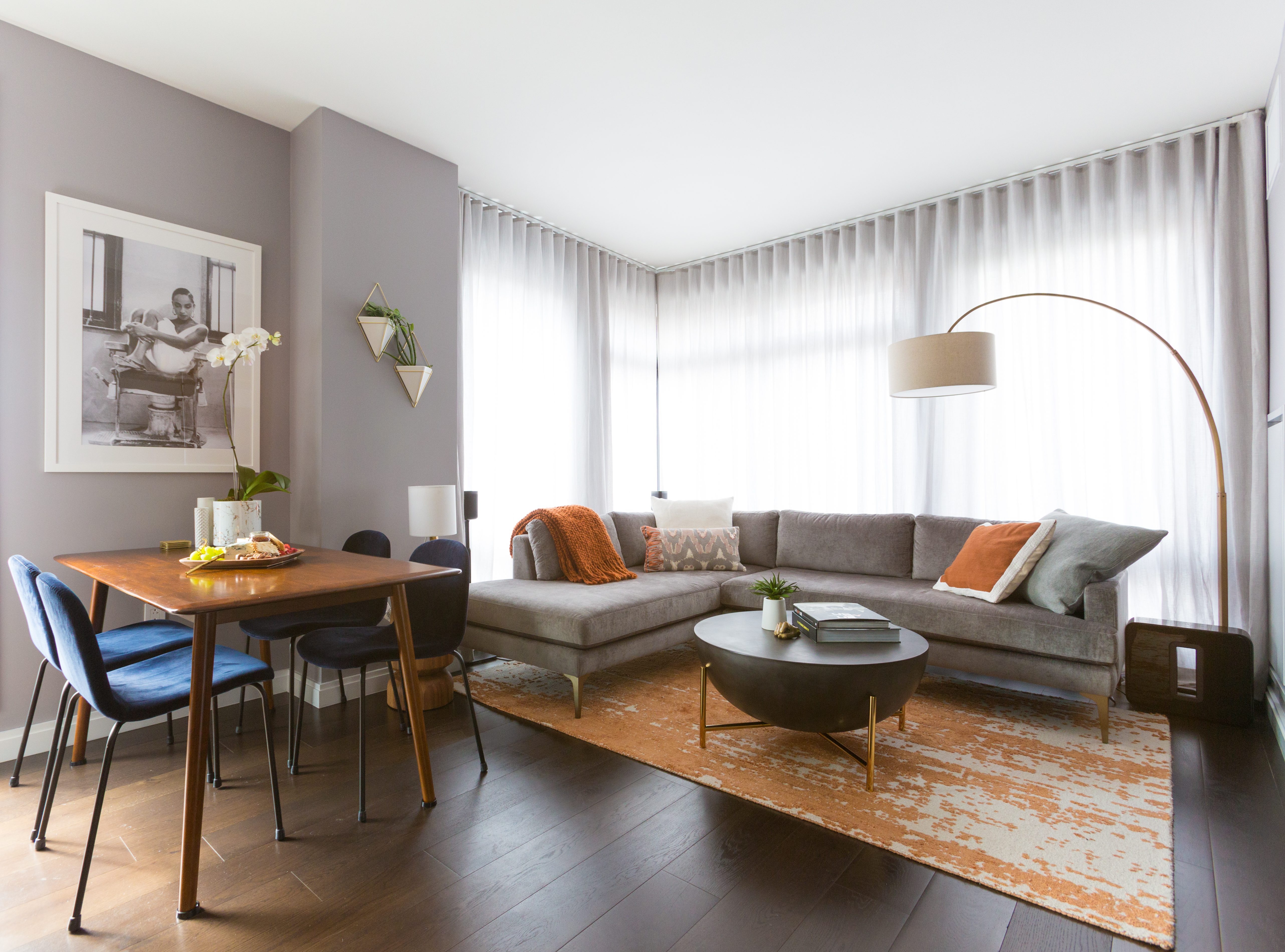 Not simply focused on design, Asprea was involved in every step of the home-buying process with her friend. She even helped Robinson narrow down the types of properties to look at.

“We weighed the pros and cons of a place that needed work versus a newer building, ultimately deciding that an amenitized property best suited her lifestyle,” she says.

After narrowing down what kind of apartment best suited Robinson’s needs, Asprea assembled a team of industry experts to find the perfect spot. A unit in sleek and modern Baltic in Brooklyn won over both Robinson and Asprea.

"I did research on the materials used in the apartment, like the flooring and type of stone used in the bathroom, to make sure it was of high quality," says Asprea. "I was also present at the final walk-through and inspection to make sure that any punch-list items were addressed." 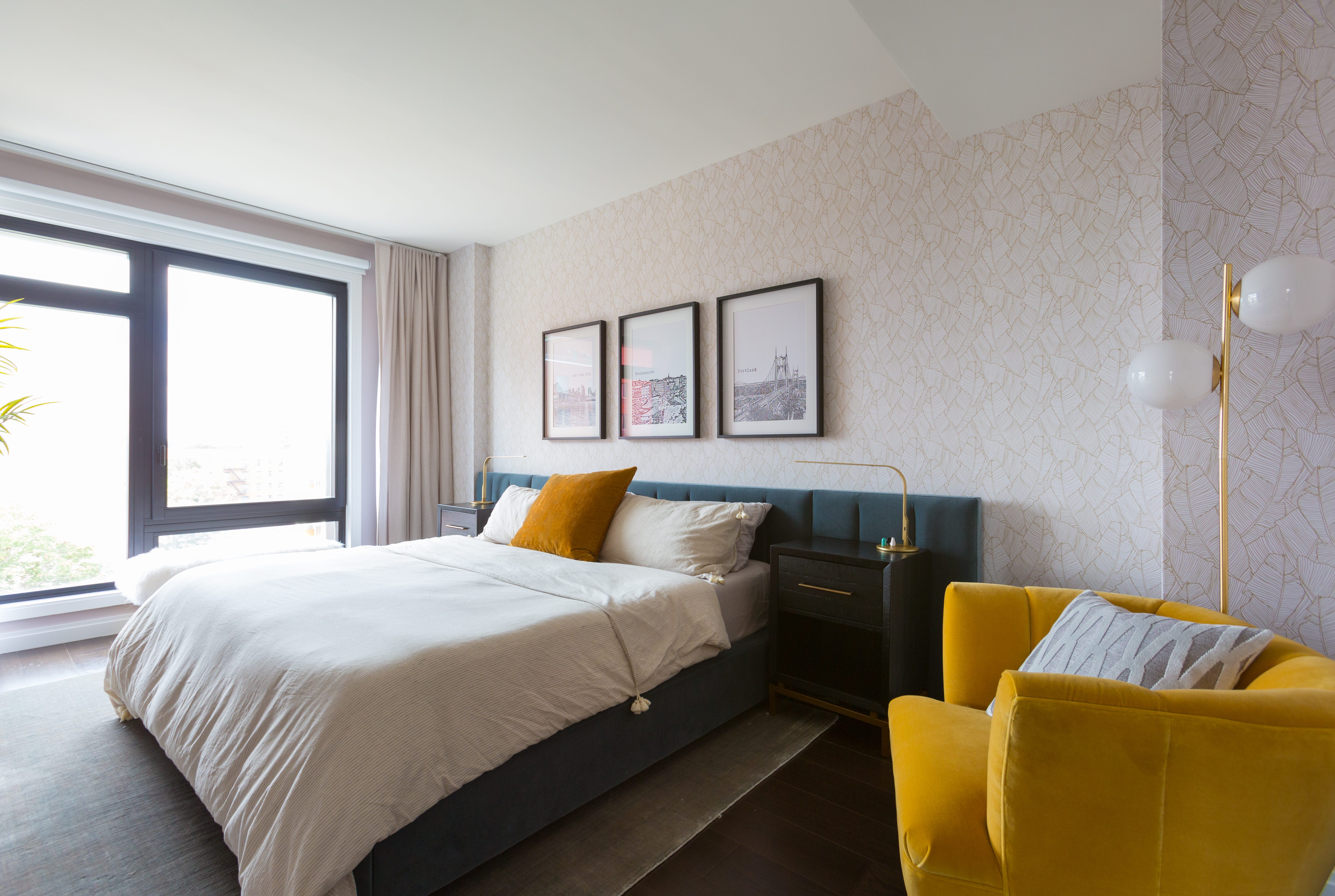 The luxury apartment building with a long list of amenities provided Robinson all of the services she required as well as ample space to live and work. For Asprea, the apartment offered a clean, blank slate where she could put her skills and passion to work. So what went into designing the home of this talented entertainer?

“Phoebe has such a fun personality—I wanted to make sure that was visible throughout the space,” says Asprea, who also had another personality to contend with during the design process: Robinson’s boyfriend. 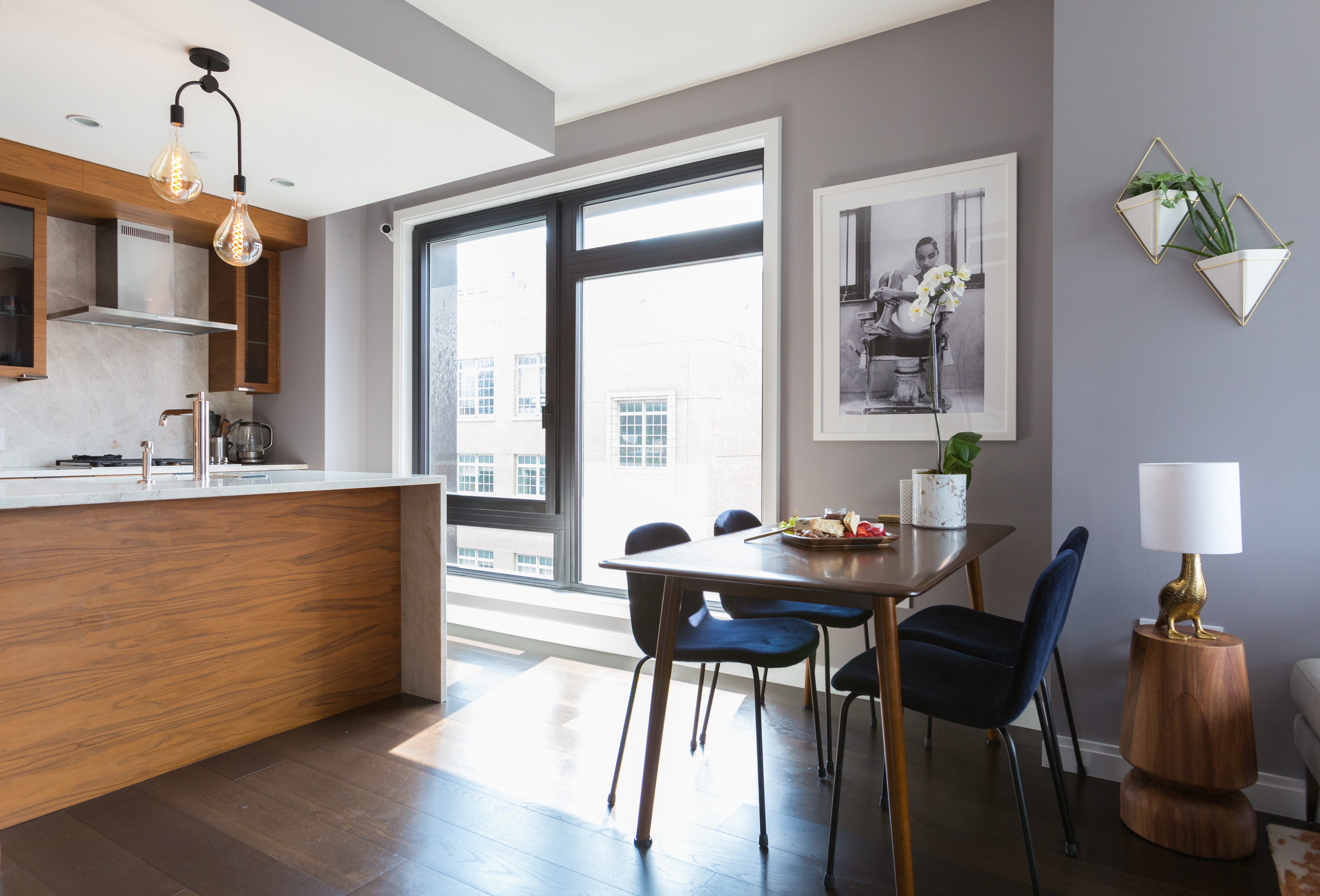 Stylewise, the couple are opposites. Robinson is vibrant and full of life, while her boyfriend is more muted and reserved. To blend their styles, Asprea infused a bit of “timeless and chic” style to go with Robinson’s colorful and lively personality.

In every room, color pops out against muted backdrops. A mix of patterns and pieces come together flawlessly to complement the space.

Asprea worked hard to make the space just as functional as it is cozy, so that the oft-traveling couple would have a space to kick off their shoes and settle in without a hitch. 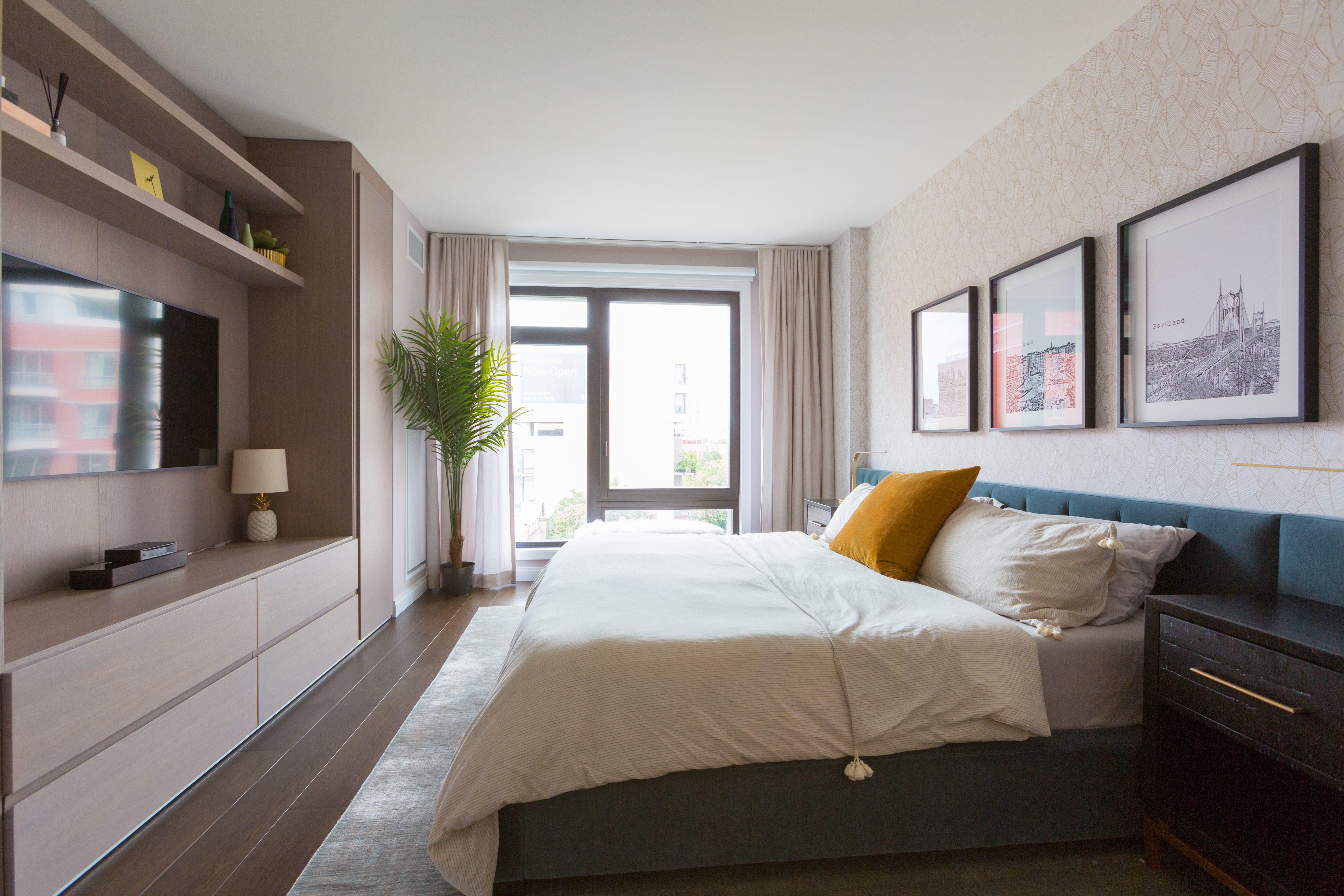 The apartment had a few specific needs: more storage space and shared office space. Again, Asprea called in the cavalry to create optimal solutions for the apartment.

“My favorite piece is a large-scale, custom wall system we designed for the master bedroom,” she says. “My other favorite is the blush velvet sofa we used in the home office. It makes a statement for sure, but is balanced by the sleek, oversized custom oak veneer desk we had built.” 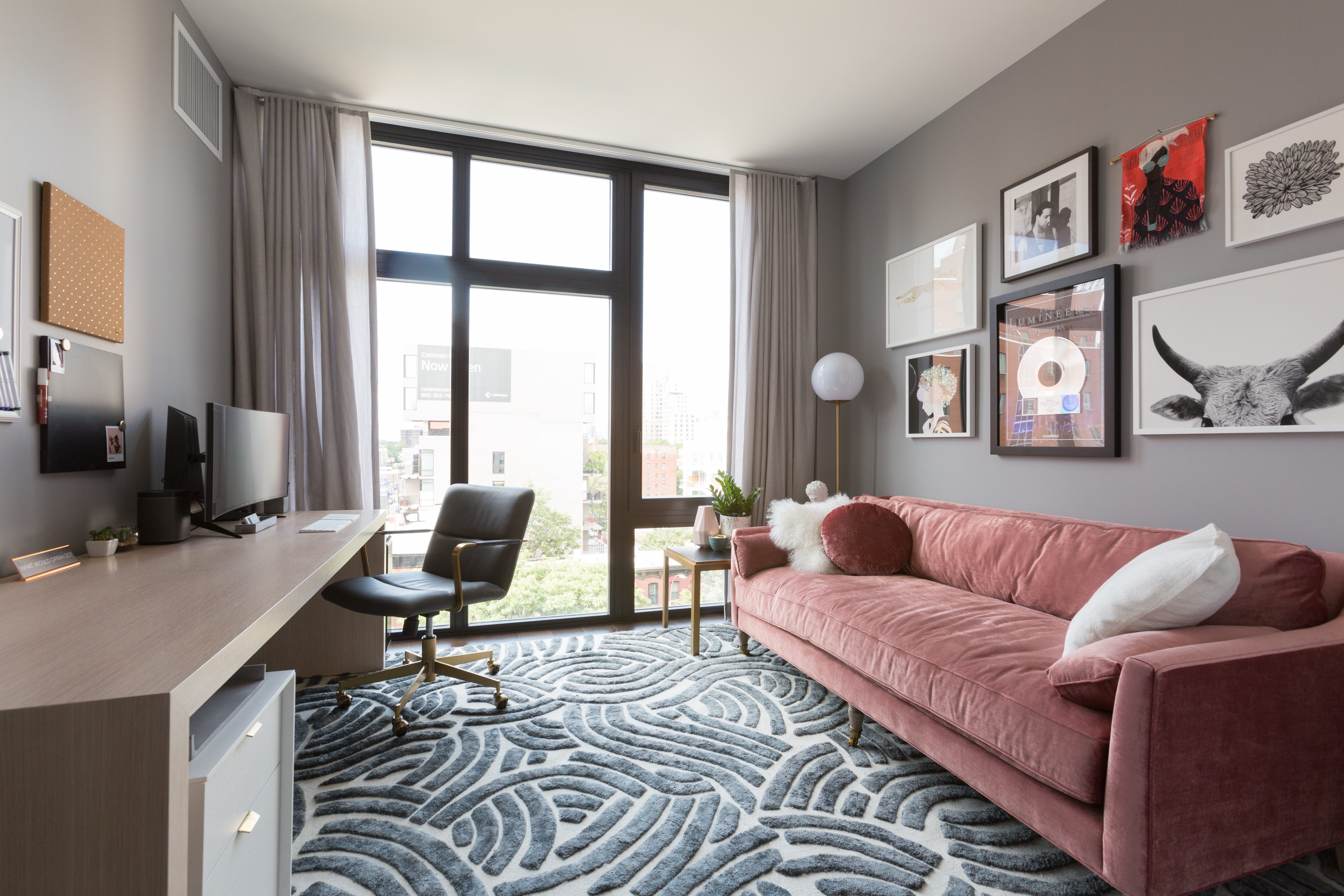 Each room pays tribute to Robinson’s influences, loves, and interests. Hanging above the master bed are prints of places of significance to Robinson and her boyfriend. In the shared office, a “What Would Oprah Do” nameplate is displayed as well as a selection of books (including Robinson’s own titles, of course). Though the home has no single theme, there is a common thread throughout the rooms: U2.

“She’s had a comedic obsession with U2 for a long time,” says Asprea. Naturally, the home had to include some memorabilia from the iconic Irish rockers. Among the many items are a photo book in the living space, a framed letter from Bono in the office, and a photo of Larry Mullen Jr.hanging in the bathroom. 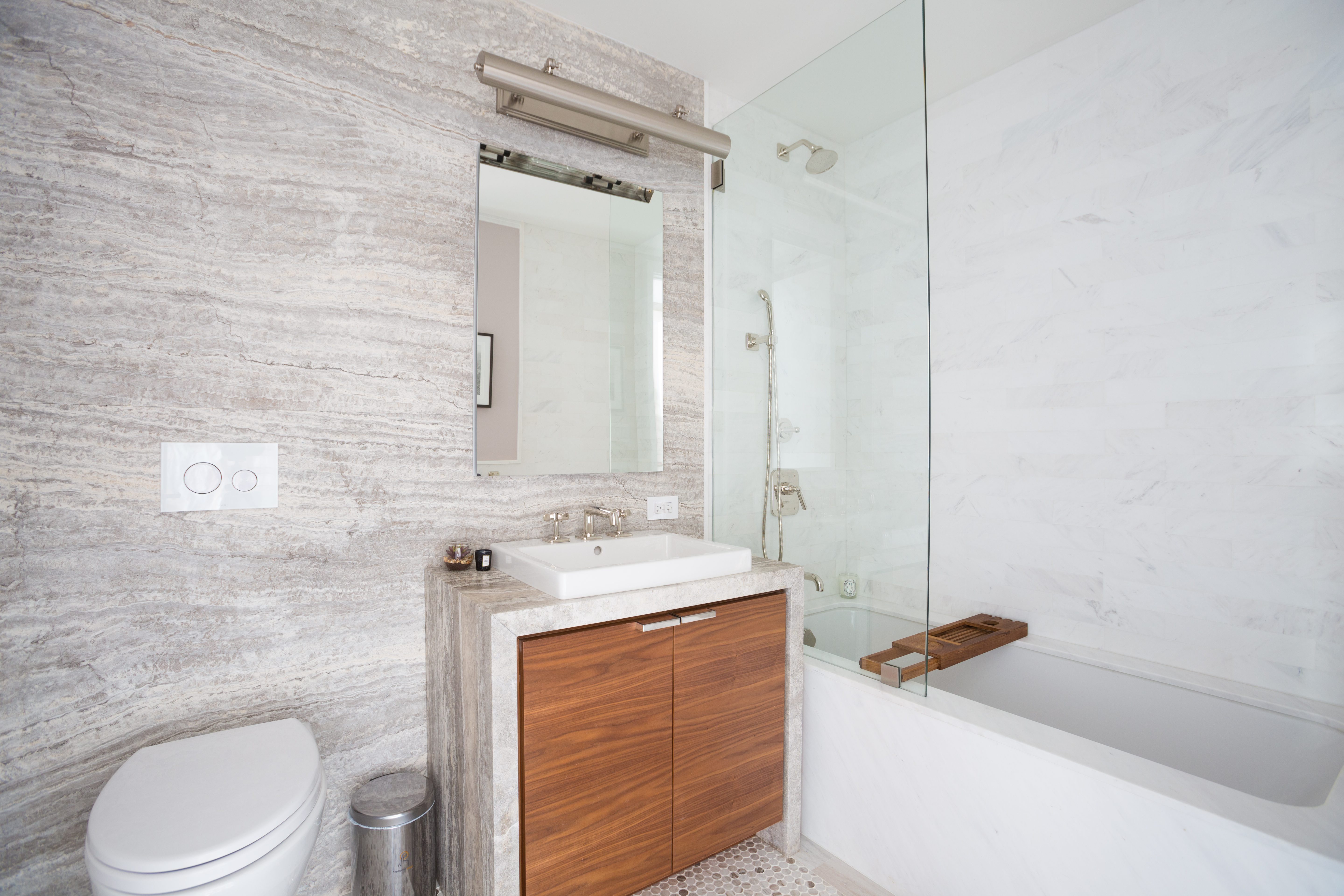 Robinson’s Park Slope apartment definitely has an aesthetic that matches her no-holds-barred personality thanks to Asprea, and we bet the comedian is thankful to have a friend in the business of transforming houses into homes.

These Are The Top Real Estate Tech Trends In 2020